Oh my goodness it has been such a long time since I have written a post. To all my subscribers I apologize for being away for so long I have been busy with school. But don’t worry I am back now and I have some really exciting things coming up that I hope you guys will stick around to see. Ok let me start off by telling you what I did the other night. My friend Rachel called me up and invited me over to a friend’s house for a home-made Greek meal.  Rachel was very excited for me to meet her girlfriend and eat this wonderful Greek salad she makes. Rachel has been knowing the lady for about 17 years and she just knew we would hit it off.I was excited also because I have never had a home-made Greek meal before but I will try most anything at least once. Once we arrived at the women’s home I was pleasantly surprised at how beautiful the décor was. She lived in one-of those older homes in Las Vegas near the Stratosphere. Her home was very lovely it wasn’t like this newly renovated homes you see in the new community that all look the same. This house had character it was very warm and charming much like our host. As soon as I walked in to the house Rachel’s friend offered me red wine. I hesitated for a moment because I don’t particularly like red wine. She the then offered me a some tequila and I graciously accepted. I am not a heavy drinker but I though why not I don’t have to drive and I don’t have to work tomorrow. As I scanned the room I noticed there were four other guess in the home as well. Rachel’s friend introduced us and we sat next to them in the living room.

Up on my observation of these people I had assessed that they were educated, well-traveled and sophisticated. There were two men and two women. The men were Caucasian one about 40 and the other around 60. The women looked to be about the same age both probably in their early to mid 60. I later found out that the older man was one of the women’s husband and the other lady was a widower. I am assuming the younger gentleman was single because he never spoke of a wife. Now if you know me you know that I am the type off person that is not intimidated by people with wealth or a higher education status. Yes I have gone to school and I have met many people in my life off all different calibers. But I have never been out the country and I have been a single working mom most my life. Most people like myself would probably have been nervous meeting these folks. they probably would have assumed that they were just a snooty rich group of people.  But I love these kind of people because you can learn so much from them. I just had to get them to open up and let loose a little. 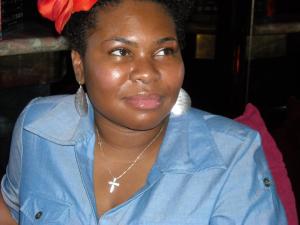 So after the usual where are you from and what made you move to Las Vegas jazz. Our host finally called every one over to eat this fabulous Greek meal that she had prepared. Our host was from the United States but her family was from Greece. I later found out the reason she made the meal was because our guess where in town visiting and she decided to cook for them. The food looked so delicious she prepared a Greek-style Baked fish, stuffed cabbage, and a Greek salad made with pieces of tomatoes, sliced cucumbers, onion, feta cheese, and olives, seasoned with salt and oregano, and dressed with olive oil. OMG I felt like I was in heaven the food was mouth-watering delicious. It seemed as though once everyone sat down to eat we all loosened up a bit. I don’t know if it was the food are the wine but we all begin to discuss some of my favorite topics fashion, beauty, music, and classical movies. Before you know it we were laughing, singing, eating and drinking.  During the discussion I found out our guest loved music from Motown so we put some Planters on and they begin reminiscing. I had such a wonderful time learning about the Greek culture their food the romantic Greek men. I also shared my secret with them off my dream to perform Beyoncé’s single Ladies at karaoke one day. Before I knew it our host was insisting that I have one more glass of tequila and climb on her big wood table and perform Beyoncé’s Single ladies. Don’t worry you guys the table was really heavy and thick I also took my shoes off. My friend Rachel was so happy that I hit it off with her friend. Rachel and her friend said I was the life of the party. We had a ball I even accepted an invitation to come to Greece to meet the rest off the family. So look forward to that it would be an experience of a lifetime for me. What a beautiful group of people I was so thankful to meet them. It just goes to show that a little wine and some good food can bring any one together. May be we need to bring that philosophy to the White House.

Thank You for reading and please leave your email in the subscription box so you can get updates. Also leave a comment I would love to hear from you guys and check out my other social networking sites below.